Just read Blogging in the fourth dimension post  in which the blogger tells how her PLN has grown in the first week of twittering.  As a relatively new Twitter user (I have been a twit for some time ;)) I remember looking at tweets a while back being overwhelmed by the jargon – the hashtags #, mentions @, hyperlinks etc, all made it look like gobbledygook.  When I first installed Tweetdeck – I thought that it was like translating a foreign language with columns and symbols everywhere.

Gradually, I have come to understand some of it, definitely not all.  The first, I will write about are hashtags #

Hashtags allow you to sort tweets. They are a filter, much like categories in a library catalogue and tags in Delicious etc.   A fantastic use of these is when they are used by people at events.

In April this year,  I did not attend the ACEC2010 conference in Melbourne, however, I participated in many streamed activities and found ideas and links due to the tweets that people who did attend the conference were sending out.   ACEC2010 actually provided iPod touches to participants and encouraged this collaboration.  It was fascinating watching tweets from people who were in the same room listening to keynote addresses and tweeting quite different reactions to what they were hearing.  Some say that this can be invasive technology with people focusing on the tweets instead of the room around them, but for me, at home, it made me part of the event.

Currently, in Denver the ISTE Conference is occurring.  The Twitter feed is frenetic (following ISTE2010 and ISTE10 as they don’t seem to have decided on one).   Participants are reflecting, commenting, networking recording and sharing – it is amazing.  I am grateful to the people who are alerting the world to their blogs, to new material etc.  It is a true example of collegiality – thank you.

You can search and follow hashtags from Twitter.com and via the Twitter applications, eg Tweetdeck.  In Tweetdeck you can easily add a column that filters all tweets with tag you want to follow. 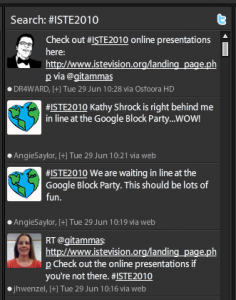 Some hashtags that I am aware of include

#VicPLN – the professional development program that I am undertaking

Anyone with more suggestions ?

Other things I have learned about Twitter include sorting out who to follow, re-tweeting and using mentions @ – all make the experience richer and so worthwhile.