Skip to content
HomeTeachMeet, TweetMeet – whatever you call it ….

A month ago, whilst listening to Henrietta Miller present at the 2011 Reform Symposium, an idea was born.  Okay, not a new idea but a version of an old one.  In the Elluminate (on-line conference) room there were three Melbourne based educators who were inspired by the ideas presented by Henrietta of face to face meetings of like-minded educators.  Through the ‘chat’ @Mr_Mitch_Hughes, @Aimee_Gale and I created the Melbourne version.  #TMMelb as a Twitter hashtag was born.   Mitch Hughes then very quickly started a wiki and that was the catalyst for the rest. 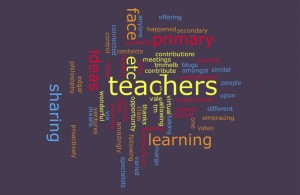 We already have a fair few interested members (could do with some more!)   We have a date set for our first event (Fri 7 Oct – Pascoe Vale Primary School) and we have a few people who have expressed interest ……

We are in our infancy, but every good thing started somewhere.   As far as I see it the benefits are enormous, including the obvious stated here :

4 thoughts on “TeachMeet, TweetMeet – whatever you call it ….”