It is just over half way through our final term at school and I thought that I would conduct a short reflection activity with some Year 5/6 children I work with.   We are trialling some new teaching styles with this group this term and I wanted to check out how they were feeling about it.

As we know there are many ways of having children reflect – this time I chose to use an on-line chat feature on a wonderful program called GCompris. The children logged in to the school network, opened GCompris, selected the chat feature and joined the channel I created for the activity.    We guided them with sentence starters – I feel …., I have enjoyed ….., I find it hard ……., I have shared ……., I wish …….., My future learning will ……. 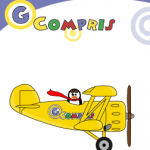 Off they went – they told me “This is like MSN!”

As we were in a lab, the children were sharing – one computer to two children.    The program allowed the children to instantly read the other responses and it was obvious they were feeding off each others comments.   We challenged them to think deeper by adding the ‘because ….’     As you can expect, the depth of replies varied from superficial to quite profound.

The teachers gained some important feedback from this 15 minute activity.   The best part for me was the next night when I checked out their blogs, and one student had written about the experience.

I’ll admit, I chose the chat feature as a bit of a gimmick – an instant medium with which they are very familiar – a tool to get them writing.   I’ll also admit that until the student mentioned the opportunity it gave him, I had not really thought about the benefit from that perspective.  The quieter children had equal say to the louder ones, something that is sometimes difficult to achieve in a classroom discussion.       I am very happy with that !!      Once again it was not the technology that mattered – it was the communication that it allowed.

FYI – GCompris – Educational software – free to a certain point and more features available by payment of  donation to the creator.   I have used it extensively with early primary students for simple mouse control and keyboarding activities.  It also has simple to complex thinking games and numeracy activities.  But as of this week, the chat feature that allows chat within a network (LAN) is my favourite !

I ventured into the MacWorld at about the time I started this project, so it seemed appropriate that I learn a Mac Tool to complete my final task – My first attempt at iMovie is below – shared to YouTube and then embedded – I am exhausted. I am sure the next time it will be easier but as with all these things, you need to have a ‘purpose’ and give it a go. It is a bit rough around the edges, but the message is there I hope.

Some fellow participants have done brilliant summaries that deserve mention – have a look at Cloud 9
and Read a Good book lately?. I love how we all take away different things from this sort of PD.

I have been involved with the development of digital portfolios before, but am about to start fresh with a new group of students.  In the time since my first try, Web 2.0 has taken over and the possibilities and potential of these products has increased.  Helen Barrett says “the boundaries between portfolios and social networking are blurring”.

Previously,  we chose to use familiar and easily available software as the tool (MS Powerpoint).  The results stayed on the school server with no real audience until parents maybe saw them when they were taken home at the end of primary school.  Nowadays, the world of blogging appears to be the tool of choice and immediately this brings ePortfolios into a different light – the potential worldwide readers with the responsibilities that that entails and the potential of feedback from a wide audience.

There is an enormous array of material available and examples of success stories abound.

Basically, my aim will be for the students to create an electronic record of their learning – reflective in nature, including work samples and written or oral reflections.    My experience tells me that the hardest part is encouraging thoughtful reflection in the children.  The mechanics of scanning and photographing work samples and adding text etc is simple.

Some of these questions I know the answer to, while others I need to answer

I also add my own further wonderings

I have bookmarked many amazing resources while I am planning, pondering and researching and they can be found on my Delicious account.

Anyone out there with any ideas or experience to offer?