I have often said that Twitter has a reputation problem and recent events have brought that to mind.  I have been a defender of this wonderful social media tool for a long while and still believe that it is a profoundly powerful tool for professionals such as teachers.  I have countless stories to tell of how using Twitter has provided me with the right answer at the right time, with examples of connected learning, and even a supply of informative and fun news feeds. Students and teachers with whom I have worked have had wonderful interactions that really enhanced their learning.

I often hear the “I don’t want to hear what so and so had for lunch or what that silly celebrity did last night”.   I get that ! Neither do I !  I tell people that all social media tools are customisable, we select who we follow and should regularly and judiciously click the Unfollow button. 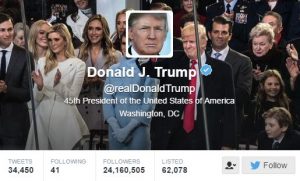 Recent Tweets by the newly elected President of the United States, have me seriously wondering and indeed, concerned.   News articles are often published citing quite major policy decisions that have been announced on Twitter and I really wish that Twitter was not being used for that purpose.    Obviously due to the stature of the office held, tweets from a President, get a large degree of attention, retweets and quotes in other press outlets.

I don’t want important government announcements made in this forum.  We all know the limitations of 140 characters and I don’t think this is the correct communication tool for such work.  Twitter has it’s purposes but in my personal opinion, I do wish that major leaders did not use the forum in this manner.  If it is possible to be old-fashioned in this relatively new sphere of communication, I think I am!  I want to hear important policy announcements and the thoughts of our world leaders distributed in other forums than social media.  Perhaps things are just evolving as I know communication does, but it makes me uncomfortable, it seems to trivialise things that are not trivial at all.

It would appear that over 24 million followers disagree with me.  What do you think ?